Living with Cancer as a Durham Student: Callum's Story

Callum Boyd (24), from Chester, was 21 when he was diagnosed with Hodgkin lymphoma and was helped by Teenage Cancer Trust. Callum now lives in London where he is on a graduate scheme.

I was in my final year at Durham University when I found a lump in my neck. I wasn’t overly concerned at first and I just thought that it was a swollen gland as I also had a cold. Over the next couple of months, I started to feel worse. I had high temperatures, experienced night sweats and I was shattered. My parents noticed that I had lost a lot of weight, despite me still having a healthy appetite. I just assumed that I was run down because I was busy with my studies.

One night I was speaking to my sister Catriona on the phone and she asked how I was feeling. She was a junior doctor on a haematology ward and she was immediately worried by my symptoms. She convinced me to go to a doctor. After scans and a biopsy, I was diagnosed with Hodgkin lymphoma in April 2017.

My consultant told me that I could have my treatment at the Teenage Cancer Trust Unit in Liverpool, or I could have the same course of treatment at my local hospital and still have outreach support from Teenage Cancer Trust. I was going to be treated as an outpatient, meaning I’d have chemo then go home, so it was much easier for me to be treated at my local hospital which was five minutes away, as opposed to Liverpool which was over an hour away. It helped knowing that I could still get help from Teenage Cancer Trust as I thought I might have to deal with it on my own if I wasn’t in one of their units.

Teenage Cancer Trust’s local Youth Support Coordinator Franki came to see me at home regularly while I was on treatment. I felt a bit alone while I was in hospital as I was on an adult ward and I brought the age down considerably, so I really appreciated Franki’s support. I know that my parents really appreciated her visits too as they could ask her questions. Franki let me know what peer-to-peer support opportunities were out there for me. It helped me knowing that, even though I was being treated at a different hospital, I could still meet people my age who were going through cancer.

I had six months of chemo and initially I was coping well, but then I had sickness, weight loss, fatigue. I had chemo every fortnight and thought I would have about 10 days between the courses of chemo where I felt ok, but soon this became just one or two days at most.

I’d had to decide whether to finish my university course. I knew that if I didn’t, I wouldn’t have been able to go back the following year due to my treatment, so I went for it. It was tough because of how ill I felt but the young adult team, my family and my university really supported me. Luckily, my final exams fell in the weeks between chemo. I travelled back up to Durham to sit them in isolation as I was at risk of infections but didn’t have time to revise and I wasn’t even sure whether I’d be physically well enough on the day. It felt very strange to return and see friends who, although were always concerned about me, were all in the normal university routine and looking forward to thinking about their next steps. It was particularly tough returning home again, knowing that I was going back to more chemo and having to put all my future plans on hold. However, I was so proud to receive my French and History degree with a 2:1 although I had to postpone attending my graduation with friends.

I finished my treatment in October 2017 and a scan revealed I was ‘all clear’. Despite it being good news, I found it particularly hard to get my head around everything that had happened to me. I didn’t know where to turn, but luckily Franki was there to speak to me in person or on the phone. It really helped to have someone outside of my family and friends to talk to and have the opportunity to reflect back on what I went through.

I went to a Look Good Feel Better event which Franki helped put on. It was the first one for men, which was brilliant. It was great to meet the others in the session. it was actually then that we had quite open discussions about hair loss and how you deal with it – I was really encouraged by the fact that Franki was thinking about these things too. I was really keen to be one of the young guys to get involved in that group.

I lost my hair during treatment and I feel like the nurses were a bit flippant about it because I was male, and they didn’t seem to think that men needed support. During the consenting to chemo appointment, hair loss was barely mentioned and my vivid memory was the box on the form being ticked as N/A for any wig referrals because I was a male patient. Hair loss wasn’t considered a big issue, which ate away at me on reflection and I thought, ‘why?’ It still affects men though, so being given the opportunity to talk about that with the other men and being given tips on how to look after our appearance was really good. 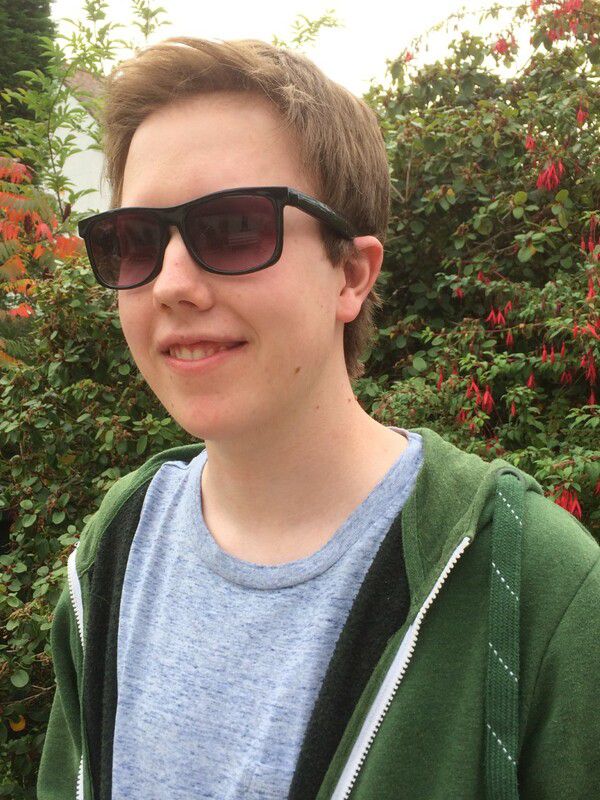 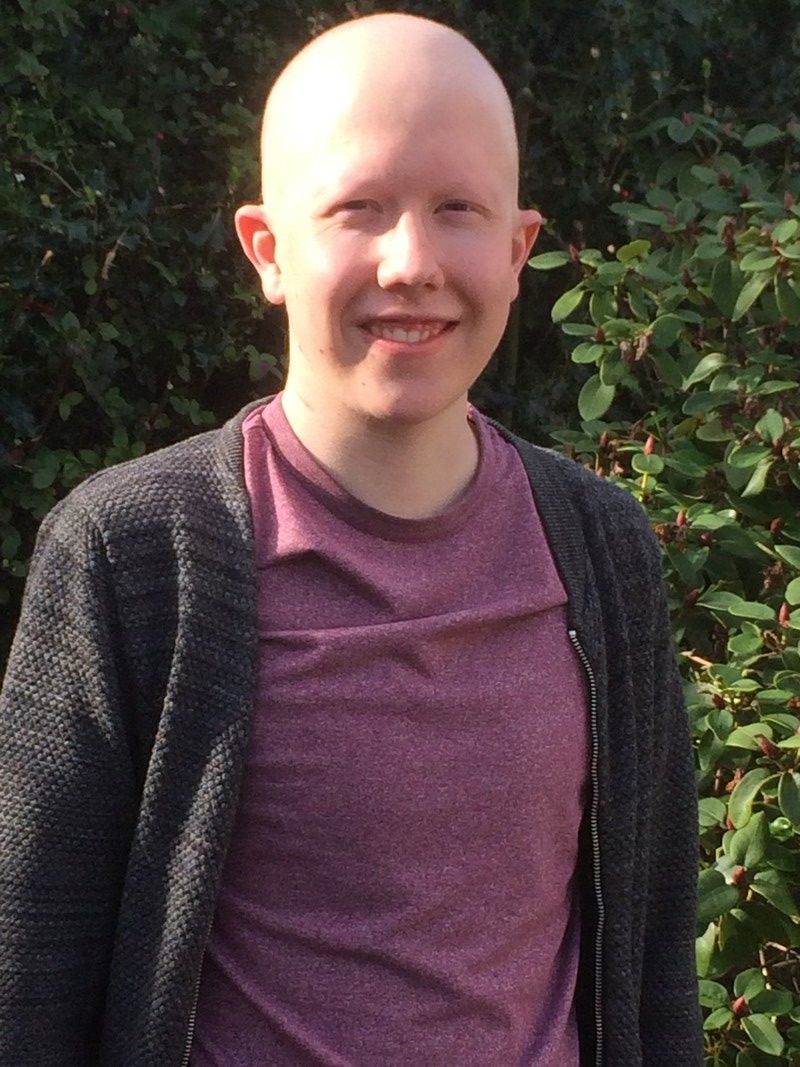 I managed to keep a fair bit of hair during the early stages of my chemo and actually did the ‘classic’ head shave towards the end of my treatment, which is interesting because often people do it at the start. I think this was to do with identity and body image, wanting to retain that little bit of control over it.

When I lost my hair, I was told I could get a wig through the ‘Hero by Little Princess Trust’ charity which surprised me as I didn’t know men could have wigs. I decided to keep the style similar and the wig was fantastic. If people didn’t know that I had lost my hair they wouldn’t have had a clue. I wore it when I wanted a boost of confidence and when I didn't want people to just stop and stare, but I also learnt to embrace not wearing it too. I wanted to get a wig for two reasons; for myself of course, - I managed to keep a fair bit of hair through treatment but I lost most of it in the end and that was a big thing to go through and I wanted to know if there was support out there for those sorts of things. Also, in a way, to make the point that actually young guys should be asking these sorts of questions and wigs shouldn’t be seen as something that are only for young women, I was more doing it for that side saying you know what young guys should get this sort of support.

I went along for quite a while not knowing that I had cancer but when you start to have these changes to your body, that’s quite a big awakening, a big realisation that you are genuinely unwell. You can kid yourself a bit, yes I was going in for chemo, I felt absolutely rotten for days after but I just put on a bit of a brave face. I was seeing friends and family and trying to retain a little bit of that old self but then you start to lose your hair and you’re losing weight and its more difficult to do that. It’s things like losing eyebrows...I didn’t even think that was a big thing but that was such a big marker of looking like a ‘cancer patient’, that’s a big defining feature to lose.

Often the narrative with cancer treatment and a cancer diagnosis is that it’s life changing’ and, it is! But not everything has to change, there’s still bits of your own life that you can keep a hold of, it might come in a different form but it’s still important to keep hold of them. Although everything around you seems to be changing and you’re thrown into this really weird and horrendous scenario and your day to day routine is different, still keeping hold to some of those constants that can stay the same, the fact that not everything has to change is probably my major takeaway from this.

At the end of my treatment, I also started going to the Teenage Cancer Trust social events. Franki invited me to meals out in Liverpool and it gave me some independence back. Having to move back home and be looked after by my mum and dad was hard, even though I do appreciate everything they did for me. Being able to speak to other people my age who also lost their independence in that way was really beneficial. It was also good to make new friends as it was hard to see the friends I met in Durham.

I went to the Ultimate Backstage Experience at Royal Albert Hall with Teenage Cancer Trust’s Clatterbridge group of young people. Again, it was great to get a bit of independence and stay overnight by myself just as I was building my energy back up. We got to do a musical workshop and make up a song. I’m not the most musically talented person at all, so for me it was stepping outside of my comfort zone. We performed the song afterwards and it was nice to have a go. We also got to go on stage and we had a lovely reception from the audience. We got a huge round of applause, which was amazing. I haven’t been to see many gigs and it was such an incredible venue and I loved watching UB40’s performance.

I went to Teenage Cancer Trust’s Way Forward event in Liverpool and it was absolutely brilliant. It helps you think beyond the cancer and this one was aimed at people over 20, so we were all at a similar stage in life. There were some great workshops and seminars on things like fertility, and as the session was interactive it was more fun and memorable. There were sessions on getting back into work and careers, which was great for me after finishing my uni course. I also found the talks on looking after yourself and your mental health really useful. I felt more confident after going to The Way Forward as I knew what support was out there and how to get myself back on track. Meeting more young people and staying away from home also helped improve my confidence. I stayed in touch with some of the people I met afterwards and it was really important to have that support network in place.

Thank you so much to Callum for sharing his story with us.

To support Teenage Cancer Trust in their incredible, vital work, you can donate here.

Durham University Charity Fashion is a Durham SU student group whose details are: Durham Students’ Union (also known as Durham SU or DSU) is a charity registered in England and Wales (1145400) and a company limited by guarantee (07689815), and its principal address is Dunelm House, New Elvet, DURHAM, County Durham, DH1 3AN