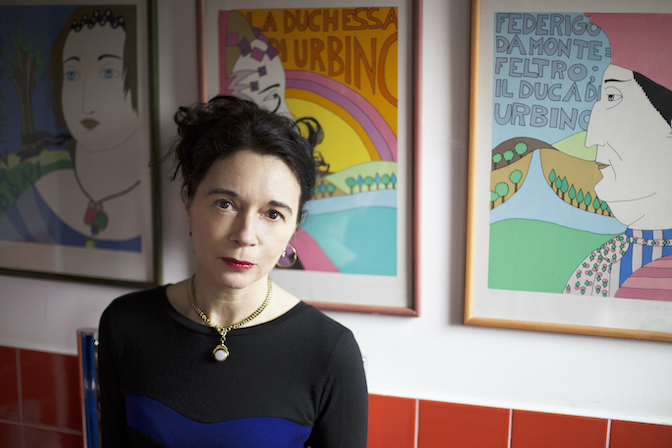 ‍
Hi! So we wanted to start with Rana Plaza: this of course was the event that provided the initial stimulus for Fashion Revolution.‍

Fashion Revolution was born in 2013 as a direct result of the Rana Plaza disaster. The team were, however, all involved in sustainable fashion in one way or another for several years before Fashion Revolution. Myself and co-founder Carry Somers actually met at Esthetica, which was the British Fashion Council initiative at London Fashion Week that I founded and curated - her brand Pachacuti was one of our exhibitors. I also come from a fashion design background, I had an upcycling brand and I work extensively with fashion students. Sarah Ditty, Head of Policy, was with The Ethical Fashion Forum (now Common Objective). So, we all have, in our DNA, many years of working in the field of ethical fashion. So, when the Rana Plaza disaster happened, the whole community really felt utterly outraged, and decided that we had to do more around this issue than what we were all collectively doing or doing as individuals at that moment. Carry came up with the initial idea for Fashion Revolution, called me, and the rest is history.
‍

What would you say were the the aims of Fashion Revolution in those early years and how have these evolved? ‍

Obviously, it started with a very strong emphasis on transparency and the social impact in the fashion supply chain. It was, and still is, about looking for visibility for the people who make our clothes and holding brands accountable. It’s about pushing brands to publish their factories supply chain lists, and pushing for citizens to understand that disasters such as at Rana Plaza will continue to happen unless we start collective action towards scrutinising the fashion supply chain. And the only way to scrutinise is by making brands accountable by publicly disclosing their practices. Fashion Revolution has raised awareness to the importance of supply chain transparency way beyond what it was in 2013. We were an incredibly successful campaign from year one. Our first day of campaigning was on the 24th of April 2014, the anniversary of the Rana Plaza disaster, and on that day we trended worldwide on twitter. And we could see, from that very first day, we already had people in many countries wanting to get involved.
‍

"It’s about pushing for brands to publish their factories supply chain lists, pushing for citizens to understand that disasters such as at Rana Plaza will continue to happen unless we start collective action towards scrutinising the fashion supply chain.”

Our hashtag #WhoMadeMyClothes grew over the years, with the spontaneous #IMadeYourClothes trending in direct response. We’ve since started contemplating the environmental aspect more, highlighting the issue of waste in the fashion industry. We introduced the hashtag #LovedClothesLast to really get individuals thinking about mass production and questions of transparency around overproduction and accelerated disposal and the impact on our environment of this mass production. We will be also campaigning on the effects of materials, and in particular the negative impact of polyester ad microfibres, making people aware of whats in their clothes.

It’s an amazing transformation that you’ve had from a few individuals to a widespread movement. How have you seen the conversations around workers rights and exploitation within the industry change as a result of Fashion Revolution’s involvement in that movement?

Certainly, awareness among citizens is now so much higher around supply chain visibility. The term ‘transparency’ itself is now almost something you can talk about in the supermarket! But, from a social point of view, from the perspective of transparency in labour supply chains, the change isn’t that extravagant. Mainstream fashion brands still aren’t paying living wages, we still know that many garment workers aren’t unionised, certainly in many producing countries. What we are seeing, however, is a willingness on behalf of workers to be seen and be a part of the conversation. We anticipated that garment workers would be scared to take part in Fashion Revolution. What we’ve actually witnessed is something so different to that: the people working in the supply chain really do want to be a part of the conversation. They are there, they’re very present. And they want to know us, they want to know the people who wear the clothes they make. The success of #Imadeyourclothes proves it.

“We anticipated that garment workers would be scared to take part in fashion revolution. What we’ve actually witnessed is something so different to that: the people working in the supply chain really do want to be a part of the conversation. They are there, they’re very present. And they want to know us, they want to know the people who wear the clothes they make.”

We did a brilliant project called ‘The Garment Worker Diaries’ funded by the A Foundation, connecting our community and our followers with the people who make their clothes. We feel that, with the awareness we’ve raised, with the language we use, with the topics that we explore, with our Fashion Transparency Index, and with our Fanzines, we’ve reached an audience that is actually prepared to keep talking about these topics. They want to learn what to do, they want to be informed, keep making changes and be a part of the solution.  Of course, without mandatory transparency it will be difficult to assess whether supply chain workers actually benefit directly from the rise of global awareness But when it comes to consumers, the conversation is further ahead than it’s ever been before.
‍

And what do you envision being the role of students in continuing that conversation?‍

Unionisation is such an important part of our industrialised culture. It’s part of our ethical culture. It’s part of our system of values. It’s part of our looking after each other. The role of students is that of propagating this message and ensuring that it evolves with our culture. It hasn’t. It’s a little stale. When we talk about unionisation in the UK, people automatically go back to Arthur
Scargill. It’s important that we upgrade this conversation to a modern-day scenario. And the modern-day scenario includes things that really weren’t there before, such as AI. There is so much that we can learn from the political culture of the unions, but we need to bring this conversation up to speed with where we are at now and to make it relevant for your generation, as it was relevant for mine.

‍
“We need to bring this conversation up to speed with where we are at now and to make it relevant for your generation, as it was relevant for mine."

What can students in particular be doing to help evolve that conversation?

‍We can’t generalise. There are millions of students and you are all studying different subjects. Its about embedding this narrative into everything you do, in every subject you study. It’s about taking this concept and running with it in every aspect of your life. It’s not just about fashion, its communication, economics, chemistry, biology, photography, philosophy....

And how do you think students can actually enact that change in their everyday life and in their consumption habits? Do you think buying second hand is a good alternative or is it about really knowing where you are buying new clothes from?

I think it’s first important to understand that the fashion industry affects so many other industries before clothing is even made. We are profoundly affecting agriculture - plants are being grown to produce fibres, trees are being cut down, and the leather industry is in part responsible for massive deforestation - so it’s not just about the clothing that we wear. It’s about the environment that we live in and clothing is the manifestation of that.

"We are profoundly affecting agriculture - plants are being grown to produce fibre - so it's not just about the clothing that we wear."

Reducing consumption is key, as it will slow down production, and of course buying second hand is great, but not as great as keeping the clothes you already own for as long as possible, mending and repairing.

But it’s more abut finding what works for you. Maybe charity shopping isn’t for you, either because you don’t like it or because you don’t have the opportunity. Depending on your lifestyle, it might be better for you to shop at Primark and learn instead how to buy less and keep those fast fashion pieces longer, treat them with respect and make them last. Or It might be about activating in a different way. It might even be about boycotting purchasing fashion for a period of time, or until some of your questions are answered. But activism, whether you are a student, citizen or policy maker, is also about the daily changes that you can bring about in your life. In your community, at university, for example, you will find that what works for someone else may not work for you. What is important is that you decide to use your actions to make your voice heard. And clothing presents an incredible opportunity for this. We all wear clothes, and the clothes that we wear - what we wear and why we wear them - can be as valuable and as powerful as absolutely anything we say.

"The clothes that we wear - what we wear and why we wear them - can be as valuable and as powerful as absolutely anything we say."

This interview has been edited for clarity.
Part 2 coming soon.
Edited by Caragh Taylor.