Meg Hugill, Charity Director of DUCFS, reflects upon this year's charity initiative with Create and 3 Sided Cube and how we can ignite change through tech for good. 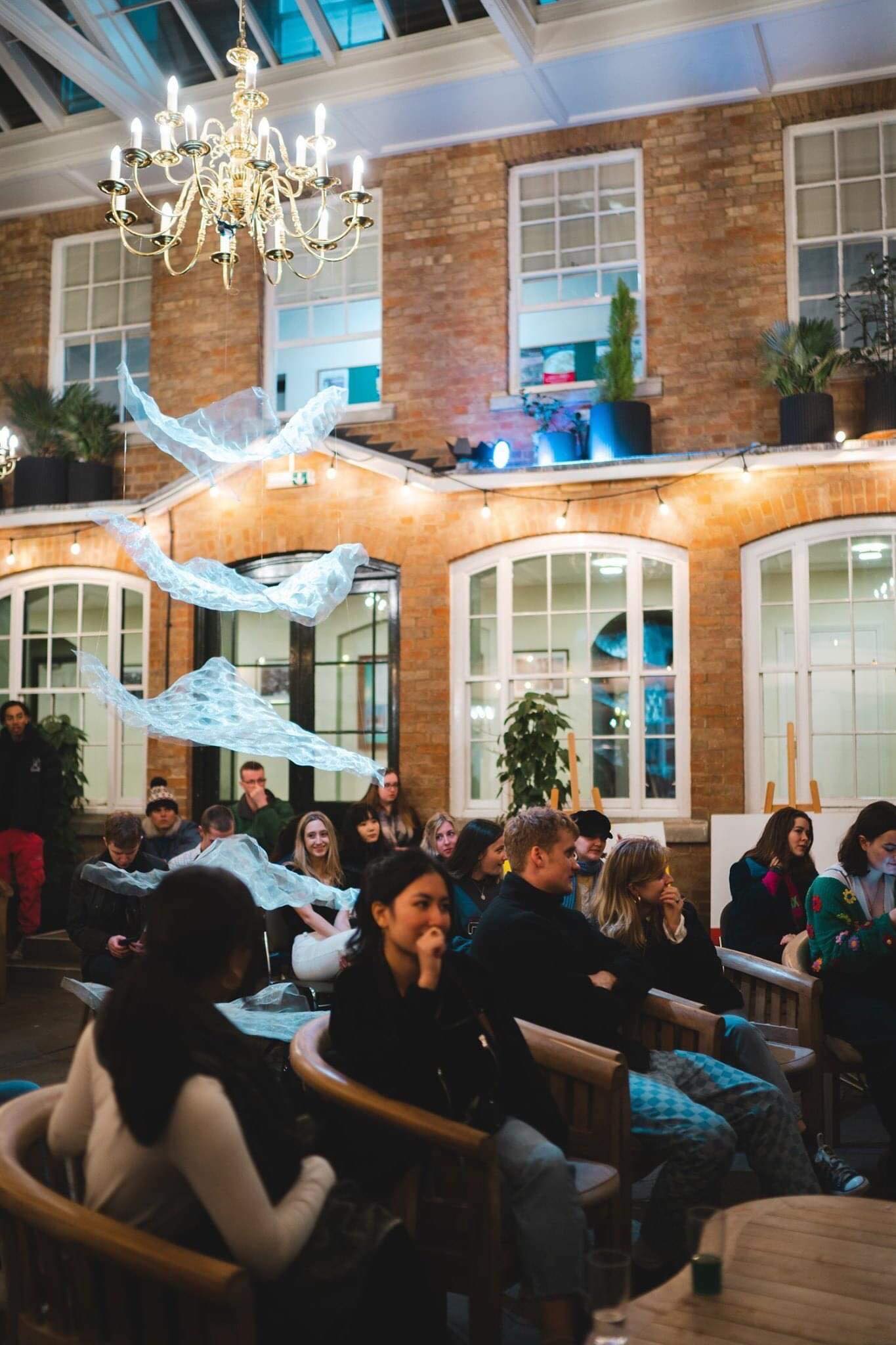 As I sat down to write this article, I wondered what its key focus should be. Whilst this piece is unsurprisingly centred around DUCFS, and the recent partnership that we have chosen for this year’s campaign, it seeks to set itself apart somewhat. In all honesty, I couldn’t bring myself to write a standard DUCFS ‘charity release’ piece in this current climate of chaos and confusion; one which continues to impact each and every one of us. As a member of an executive committee, which both student and local bodies hold controversial opinions towards, I hope that this entry invites reflection on the world’s current realities – relatable or otherwise. For this reason, my outline of this year’s campaign and the wonderful work done by our two selected partners enacts more of a call to arms for ensuring a brighter future, rather than simply a celebration of DUCFS and its work.

The charity sector has been immensely impacted by the global pandemic. As the demand for charitable services ever-increases, the organisations providing those in need continue to battle with decreasing donations and an inability to supply usual, in-person, operations. For the remainder of 2020, UK charities are facing an immense funding gap of roughly £10.1 billion. The Institute of Fundraising posit that 84% of charities in June 2020 had reported a significant decrease in their income over lockdown, with 90% predicting that the pandemic would have a negative impact on their ability to meet their annual charity objectives. It is hardly surprising that these statistics highlight not only the imminent threat of Covid-19 to charitable enterprise, but its potential to haunt the charity sector for decades to come.

Contrastingly, we have seen a vastly exponential increase in worldwide engagement with various technological platforms. Humans have responded to the global pandemic by becoming increasingly reliant on virtual connectivity, and consequently turning all schematised understandings of work, education and communication on their heads. Traditional social media sites have continued to thrive, whilst apps that used to linger in relative obscurity have seen a rapid increase in levels of user sign-ups and engagement. Take our newly trusted colleague, Zoom, which saw a 2,000% increase in its users between the months of January and May 2020 alone. This pronounced shift to technological connectivity has demonstrated humans’ capacity to collectively adapt to crises, and change societal norms in line with our evolving technological efficacy.

When looking at the numbers, the human race appears more connected than ever, a notion that we all know is far from the truth. Indeed, our conception of human division sharpens when we witness its work hand-in-hand with COVID-19; whether that be the social divide between loved-ones, the digital divide between the affluent and the poor, or even the more elusive psychological divide between the self and one’s surroundings; society has never felt so fractured. Whilst the increasing prevalence of technology has provided many with relief and moments of brilliance, it has facilitated the development of oblique societal friction and political polarisation to an extent that can no longer be ignored. All of this points to a much larger question: given that we know humans have the capacity to effectively respond to crises, how can we use these methods of adaptation to create a better society?

This question ultimately steered the decision-making process for DUCFS 2021’s charity selection undertaking. At first glance, it might be difficult or counter-intuitive to consider how technology and charity might share things in common – but there is a comprehensive overlap. It was in this very overlap in which the motivation for our own campaign was born. Whilst we knew that many charities deserved additional financial and technological support, two key contributing factors guided our decision making: the first was to select a charity that focused on local, disadvantaged areas throughout the UK to ensure that our funds were as impactful as possible; the second consideration urged us to support unique organisations, which aimed to preserve creative and philanthropic enterprise for as wide of an audience as possible.

And so, this year DUCFS has teamed up with creative arts charity, Create, and tech-agency, 3 SIDED CUBE. Both of these organisations have acquired an impressive following; the former being most recently awarded the Charity Times Charity of the Year in 2020 after having been shortlisted for the prize on four previous occasions. As ably put by Create’s CEO, Nicky Goulder, one reason that this charity in particular is so deserving of this recognition lies in its ability to ‘demonstrate the huge impact a small charity can have on a lot of people.’ This statement rings true, as the positive effects that Create’s work has on its participants is self-evident: hosting over 10,000 creative workshops and reaching almost 40,000 participants since its launch in 2003, Create has provided respite, expertise and skills to many vulnerable and/or disadvantaged individuals using the power of creativity. During lockdown, the charity expanded their venture by moving their inclusive workshops online in the form of Create Live!, to reduce isolation for children and adults alike, as well as improving the confidence, creativity and teamwork of their various participants.

Passion and dedication permeate Create as an organisation, it really is a ‘national charity championing local priorities’. The charity seeks to empower emerging professional artists whilst facilitating opportunities for individuals that may not have otherwise been afforded them in life. At the heart of what they do, they believe that everyone – regardless of personal circumstances or backgrounds – should have equal opportunity to develop their potential. By targeting areas of the UK where funding and engagement in the arts is low, their sustainable creative workshops have reached groups of people from every walk of life; from young carers to vulnerable old people, putting their mantra of empowering lives into practice. In their 2020 Participant Report, 50.4% of Create’s participants were BAME, 46% experienced some form of disability or special educational needs, and 40.1% were entitled to free school meals. Thus, Create’s mission to empower lives and ignite change through creativity is necessarily indiscriminate, as creativity itself abstains from any internal expectations or social barriers.

We know that creativity has a positive impact on wellbeing, emotional and mental health; builds skills, brings joy and reduces isolation; and levels the playing field for people from many different walks of life, helping to promote equality. - Nicky Goulder (Chief Executive, Create)

So, how does a successful tech-agency such as 3 SIDED CUBE come into all of this? Tech giants, such as Amazon, Google and Facebook, have come under immense scrutiny for emerging as ‘winners’ from the coronavirus pandemic, stronger than ever. This fact has disrupted our understanding of how technology is used, and who gets to reap the rewards of its use. For many, it might be assumed that businesses with the technological edge have been broadly safe during the recent tumultuous months. Yet, there is a dark truth laying behind this generalisation as many smaller tech-businesses and start-ups have floundered on account of the tech-giants’ success.

Whilst 3 SIDED CUBE has continued to attract notable clients (including the likes of Lush Cosmetics, American Red Cross, England Rugby and 02), its most attractive feature is its insistence on assisting organisations with a real desire for positive change. Their mantra urges individuals to guide our virtual reality by using ‘tech for good’. Indeed, 3 SIDED CUBE set themselves apart from other tech-agencies in their commitment to resolve charitable, or non-charitable organisations’ problems through their coding and development of innovative solutions. Their first-ever released app, an eyesight testing platform, quickly became the world’s #1 medical app, and since then they have endeavoured to tackle other large issues ranging from saving our oceans and forests to making marginalised children the heroes of their own stories. By mobilising technology in this way, 3 SIDED CUBE are contributing to a more positive conception of technology as their life-changing softwares strive to change the world. This emphasis on positive change, and ensuring a brighter future for the many not the few is what resulted in our funding of the partnership between the two inspiring organisations, Create and 3 SIDED CUBE.

Technology is a hugely powerful tool. But as every Spiderman fan knows with great power comes great responsibility. The technology itself is agnostic, it’s up to us how we use it, at 3 Sided Cube we use it for good. - Richard Strachan, (Managing Director, 3 Sided Cube)

So, let us return to my earlier question: how can we use these methods of adaptation to create a better society? It feels inevitable that many will disagree on any definitive answer. Yet, we can all agree that now more than ever we have seen the importance of technology for mitigating the effects of crises, which leads us to ponder the moral obligations inherent to our creation of an increasingly mechanised society. Whilst many are aware of the clichéd disadvantages and benefits of integrating technology in our daily lives, we must remember that we, the iGeneration, otherwise known as Generation Z, have embarked upon adulthood as technology has most exponentially progressed. It is up to us, it seems, to determine the velocity of technology; it is up to us, to aim its function, use and perception towards the brightest future possible where we can fully ignite change through tech for good.

What excites the team most about the upcoming partnership with Create?
As a creative organisation we understand the impact that creativity can have on people's lives. Everyone's well-being is being stretched to the max at the moment, so helping Create to deliver on their mission is hugely exciting! - Richard Strachan, (Managing Director, 3 Sided Cube)

What excites the team most about the upcoming partnership with 3 SIDED CUBE?
There is such a great synergy between what we both do – creativity and social impact are at the heart of each organisation. To work with an organisation who not only intrinsically understand our vision and mission, but also share them, is incredibly exciting! - Ed Jackson (Director of Development, Create)